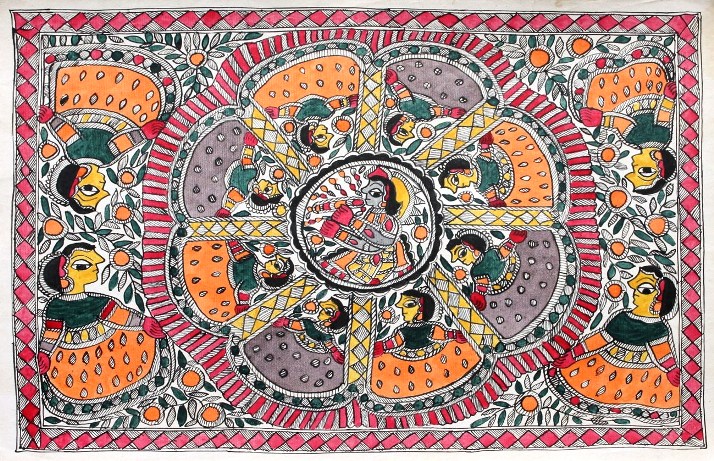 Mithila Painting or Madhubani Painting is a style of painting popular in the northern Mithila region of Bihar and parts of Terai in Nepal.  It has been practiced as a folk art by the women of Mithila and was traditionally used to decorate the walls of their homes. It is characterized by two dimensional line drawings filled with bright colors, depicting Hindu deities, court scenes, marriage scenes, flowers, animals and geometric patterns.

The skills of painting have been passed on from one generation to another for ages. Bihar being a conservative society, the role of women was largely confined to the four walls of their home and they used painting as mean to express themselves. The paint was usually made of powered rice and natural ingredients like ochre, turmeric, flowers and lampblack were used to add colors.

The art form was discovered by the Outside world largely due to a natural calamity. In 1934, a devastating earthquake struck North Bihar, causing widespread destruction. While inspecting the damage done by the earthquake, a British officer William G. Archer came across specimens of the paintings on the walls of homes that had tumbled down.  He was so impressed by the beauty of these paintings that he captured them in black and white photographs and took them to England where he later held the position of  South Asia Curator at London’s Victoria and Albert Museum.

In 1949, the Mithila paintings were published in the cultural magazine Marg, bringing substantial public attention to them perhaps for the first time. The famine of the 1960s encourage the women of Mithila to take up painting as a business venture. By 1970s, these artists were showcasing their works in art festivals in USA, Europe and Russia. 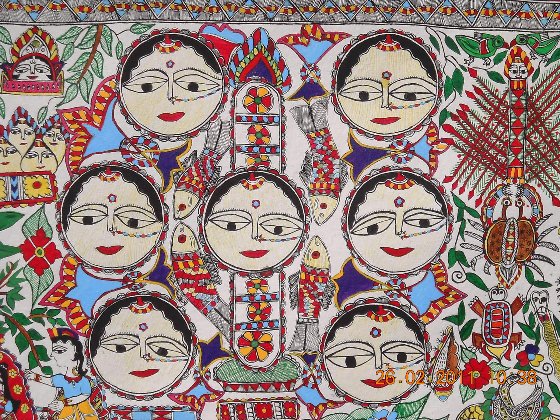 There are five styles of Mithila painting, all distinct from each other:

Bharni, Katchni and Tantrik styles were traditionally used by the women from the upper castes while the Godna and Gobar styles were used by those from the lower castes. However with change in society, this distinction has blurred and now caste is not a constraint for creativity.