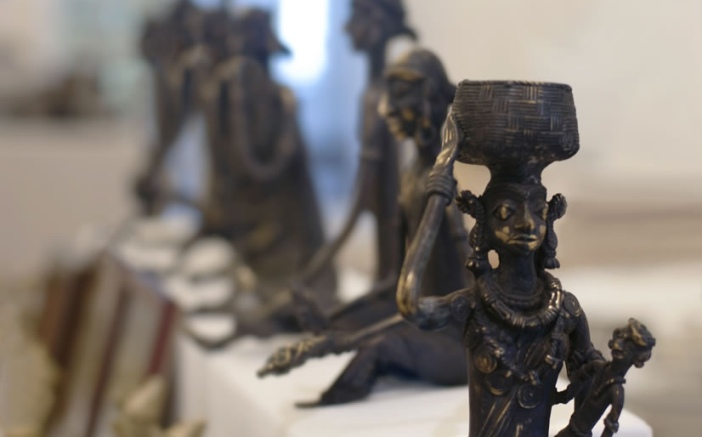 Dhokra is a traditional metal craft prevalent in the tribal areas of Central and Eastern India.  It consists of non-ferrous metal casting using the lost wax casting technique to create beautifully ornamented metal artefacts. The name Dhokra denotes the nomadic communities which excel in this metal art form.

The lost wax technique is the oldest form of non-ferrous metal casting technique known to mankind. It was used by the artisans in Mohanjodaro to cast the famed bronze figuring of a dancing girl and a bullock cart more than 4500 years ago. Apart from India, the technique was used in ancient Egypt, China, Mesopotamia and Greece.

In India, the Dhokra people are traditional metal-smiths settled in the mineral rich parts of India like West Bengal, Orissa and Chattisgarh and are mainly classified as scheduled tribes.

The lost wax technique have been mentioned some old Indian texts, in the context of solid or hollow casting of idols.

The lost wax technique used in Dhokra employs the hollow casting process. A clay core is created having roughly the same shape as the final cast image. The core is then covered with layers of wax. The wax is then shaped and carved in fine details as per the specifications of the image. It is then covered with layers of clay which takes the negative form of the wax design, with outlets for drainage. The clay is heated and molten wax is drained out, thus creating the mold. The mold is then filled with molten brass, using brass scrap as raw material. The liquid metal fills the mold and is allowed  to cool. The clay mold is then broken and the metal work is polished and finished as the end product.

The main aspect of the Dokra style is its primitive simplicity, folk motifs, rustic beauty and imaginative design patterns. Their aesthetic senses and skills have undergone a lot of evolution over the years. Bereft of a formal education, the talent and artistic wisdom of these people is the outcome of their inborn instinctive creativity and the traditional wisdom evolved over centuries.

Dhokra craft has found a market among the metal art lovers of India and abroad and its products are in good demand. Bell metal horses, elephants, peacock, owl, religious figures, lamp caskets, trinkets, jewelry etc are well sought after. At present, about 57 Dhokra artisan families in the districts of Bankura, Burdwan, Mayurbhanj and Birbhum are keeping this tradition alive. 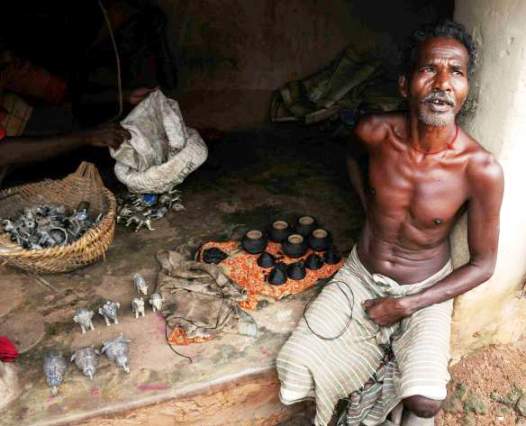